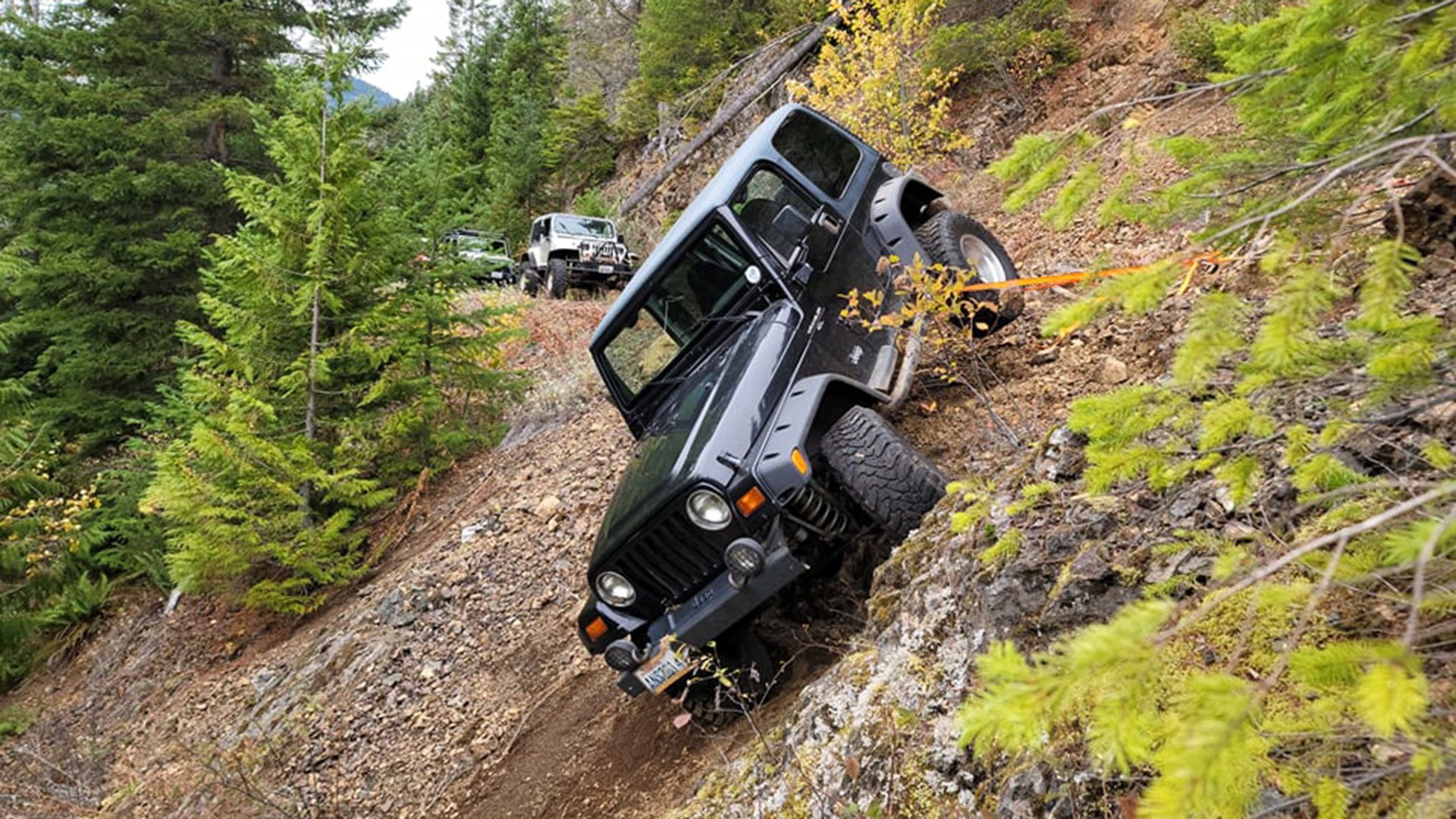 In Washington state, there is a large group with thousand of Volunteers well prepared and willing to help anybody who gets in trouble while offroading. Now WORN also works with us, and we couldn’t be any happier.

But let’s start from the beginning. On Sunday, at 7:50 am, we received a recovery request in our portal submitted by Chris Tarantino, who was driving on a forest road when the road shifted, forcing his Jeep to go down the hill. His Jeep started sliding down the mountain, and he tried to pull it up without any luck. So they strapped it down and left the vehicle. Luckily he had a friend with him who took him back home.

Chris, could not make it back on Monday, so the recovery was arranged for Tuesday. At 10 am, the group got together, and the following is the description provided by Carl (Owner of the red jeep, AKA Superjeep), who with Joe Smally, Scott Stansberry and Jeb Abernathy worked on this recovery. Special thanks to Karen Gillespie, who shot the video and shared the photos and notes with us.

We took quite a while to figure out our rigging, we were not happy with any of the angles we wound up with, but that is where God grew the trees. I hooked to two small ones, like 4″ each. By wrapping the straps around the trees, we managed to adjust the tension evenly.

I was able to get the same load in each of the small trees, then pulled forward to check for pretty much even toughness; we also took extra time to lineup the jk with its anchor tree and the snatch Block as we knew the front end would lift, so Drove it up the hill a bit till the rear bumper hit the ground. It was good teamwork, and everybody had good ideas, and we did not move forward till all agreed. For winching, we had one leader (Carl) using the same hand signals as professional crane operators. We went over the plan a few times first. This technique paid off well as we had to pull him first off the rock, so one winch pulled a bit, then both a bit, but then after it was up the hill, we had to pull in with one winch and let out with the other.

lessons learned: one lesson learned in this was to keep an eye on the line in the snatch block, superjeep’s line it jumped the pulley as it pulled up off the ground, so relieved no damage. As long a tension is on it was of course ok.

Is also a good idea to have short pieces of good chain to go round places, what you couldn’t see but I could was that as the vehicle rotated and moved, the angles on the straps changed and they slid up against sharp edges of frame and suspension brackets. Obviously we did it, but could have been safer. I guess what Im trying to say is, 99 percent of the time if your rigging fails, it’s just minor set back, but in this case there was so much at risk.

Working with WORN and their volunteers was excellent. They responded quickly and in a very professional manner. I know we will have a busy winter, and having a team in Washington helping people like them is great. Thanks to all the volunteers.

The photos below were provided courtesy of Jenn and Chris Tarantino.