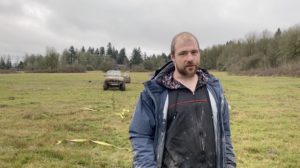 Matt was testing his 1995 Toyota 4Runner, running 37s on a field near Happy Valley where he knew the owner, when his rig got badly stuck in mud all the way to the chassis.

On Tuesday, the day he got stuck, he called a tow company, which quoted him $150 per hour, but they also got stuck immediately upon entering the field, which was pretty socked in water. So the tow company needed to call for rescue themselves and told him he needed a tractor or some other bigger vehicle to do the recovery.

Matt came back on Wednesday and started working on getting his rig out again, he had a friend helping him but they had no luck. Later that day a woman walking her dog while passing told him about an organization she heard in the news, that helped people in situations like him. So he looked up OOR and sent a ticket at 3:09. We received the ticket, and since I was a few miles away, I reached back and head there myself. By 4:20 he was out. I stayed on solid ground and pulled him with my winch and a few straps while using the traction pads in his front end.