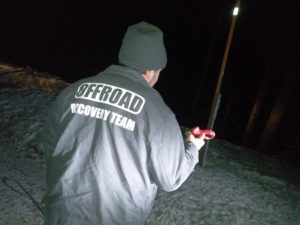 Tuesday afternoon, we were on our way up to Mt Hood with Adam, trying to find open snowy trails to test the new Jeep XJ he worked on for the past few weeks. I was following with my JK. We were driving around when we found an accident on the side of Hwy 26.

An elderly family traveling back from Mexico, two women and one man hit ice and skid off the road, landing upside down 30 feet down the bank in 3 feet of icy snow.

They were there for at least 1 hour by the time we found them. An EMT already checked on them, and luckily they were ok. They already called the police. But since language was a bit of a barrier, I called the insurance for them and informed them of the situation while we tried to keep them warm as much as we could. Adam flipped the vehicle back, but it was not drivable.

So at this point, the only option was to keep on waiting for a tow or the police. After 2 1/2 hours, we decided the best curse of action was to take their belongings and drive them back to a warm rest area where they could be reunited with their family driving from Yakima to rescue them.
We managed to get the two women in their 70 in our vehicles, but the male was very weak, and we had to drag him up the icy hill and push him into our vehicles because he was suffering from hypothermia.

We drove from near Clear Lake up to the rest area in Government Camp and called and coordinated with the family so they can be picked up.
Today we were called by the family, and we are helping find a tow to get the vehicle. They were extremely thankful to our group for deciding to stop and help.

Special mention to Russ, a truck driver, who first found this accident, broke their windshield and got them out of the vehicle, and stayed with them for over 2 hours. He wouldn’t leave the scene until he knew they were safe. Thanks Russ!

Note to myself:
1 – Have some blankets in my car.
2 – Order and carry in my car a foldable stretcher (there are available in amazon for $20).
3 – Carry extra masks for covid