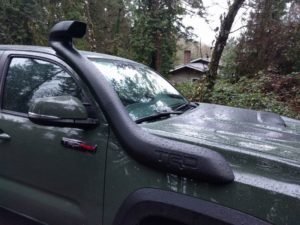 The best selling midsize is facing new competition, putting its reputation to the test

For many years, off-road enthusiasts who wanted a new midsize truck had only one real choice — a Toyota Tacoma equipped with Toyota Racing Development options. For starters, hardly anyone else was even making midsize trucks. And the closest competitor, the Nissan Frontier, wasn’t as rugged as the TRD Off-Road and TRD Pro 4X4 versions of the Tacoma.

But all that has changed in recent years. As Pamplin Media Group contributor Jeff Zurschmeide learned in September 2019 at the Trail Trek Tour, the TRD Tacomas are being seriously challenged by off-road versions of three newer midsize trucks — the Chevrolet Colorado ZR2 Bison, the Ford Ranger FX4, and the Jeep Gladiator Rubicon.

The test course in the heart of Pennsylvania’s coal country featured natural trails and man-made challenges including steep uphill and downhill sections, water crossings, and rock crawling obstacles. In back-to-back comparison tests, all three of the newer trucks proved just a capable as the Tacoma TRD Pro. They were also more comfortable on the road. In the end, the participating journalists picked the Ranger as the best balanced truck.

Toyota doesn’t need to panic, yet. Supported by a loyal fan base and a reputation for reliability, all versions of the Tacoma are easily outselling the competitors, including their off-road versions. They are still the go-to midsize trucks for work and play.

But, as a week of test driving the 2020 Tacoma TRD Pro 4X4 revealed, Toyota might not want to rest on its laurels much longer. Let’s face it, most off-road enthusiasts drive their trucks on paved roads most of the time. And the Tacoma is showing its age. The current version was first introduced in 2005 — an eternity in today’s automotive world — and last redesigned in 2016.

The powertrain is especially beginning to show its age. The base 2.7-liter inline four is only suitable for rear-wheel-drive versions. The optional 3.5-liter V6 is proven, but competitors are offering turbocharged and even optional diesel engines with more torque.

Yes, as the Trail Trek Tour showed, the TRD Pro 4X4 is plenty tough. It was able to cross steep inclines, rocky surfaces, and even moderate streams with ease. But, despite its undeniable strengths, the Tacoma has some notable shortcomings, beginning with a cramped interior and a choppy around town ride, especially when equipped with the TRD suspension parts. Of course, they are designed for off-road use, but the comparison results favored all three newer trucks on pavement.

Tacoma trucks are available in a wide range of styles, beginning with a two-door, rear-wheel-drive base SR model that starts at just $26,050. All TRD Pro models are Double Cab four-door, 4WD, short-bed versions with more off-road equipment that the already-capable TRD Off-Road has. Upgrades include Fox 2.5-inch-diameter internal bypass shocks, a even more lifted suspension with progressive-rate leaf springs in back, a TRD exhaust system, special 16-inch wheels and tires, Rigid Industries-branded fog lights, specific LED headlights and taillights, an aluminum front skid plate with “TRD” in red letters, and loads of TRD Pro logos.

Also new for 2020 is an 8.0-inch touchscreen and infotainment system that finally includes both Android Auto and Apple CarPlay compatibility, plus a 10-way power-adjustable driver’s seat.

My TRD Pro also came with an air intake snorkel that extended over the front passenger side door. At first I thought this $725 option was intended to help allow deep water crossings, a YouTube subject popular with off-roaders. In fact, it is designed for dry climates and called the Desert Air Intake Package. The elevated scoop reduces dirt and sand from getting into the air intake, which is otherwise set below the engine. The snorkel made my test Tacoma look even tougher, but it’s probably not very necessary in the wet Pacific Northwest.

The Tacoma still dominates the midsize truck and off-road midsize truck market. But the competition is increasing, even for those looking for the most rugged all-terrain midsize truck. Traditionalist might be more than satisfied with Toyota’s latest offerings, but maybe not for long.