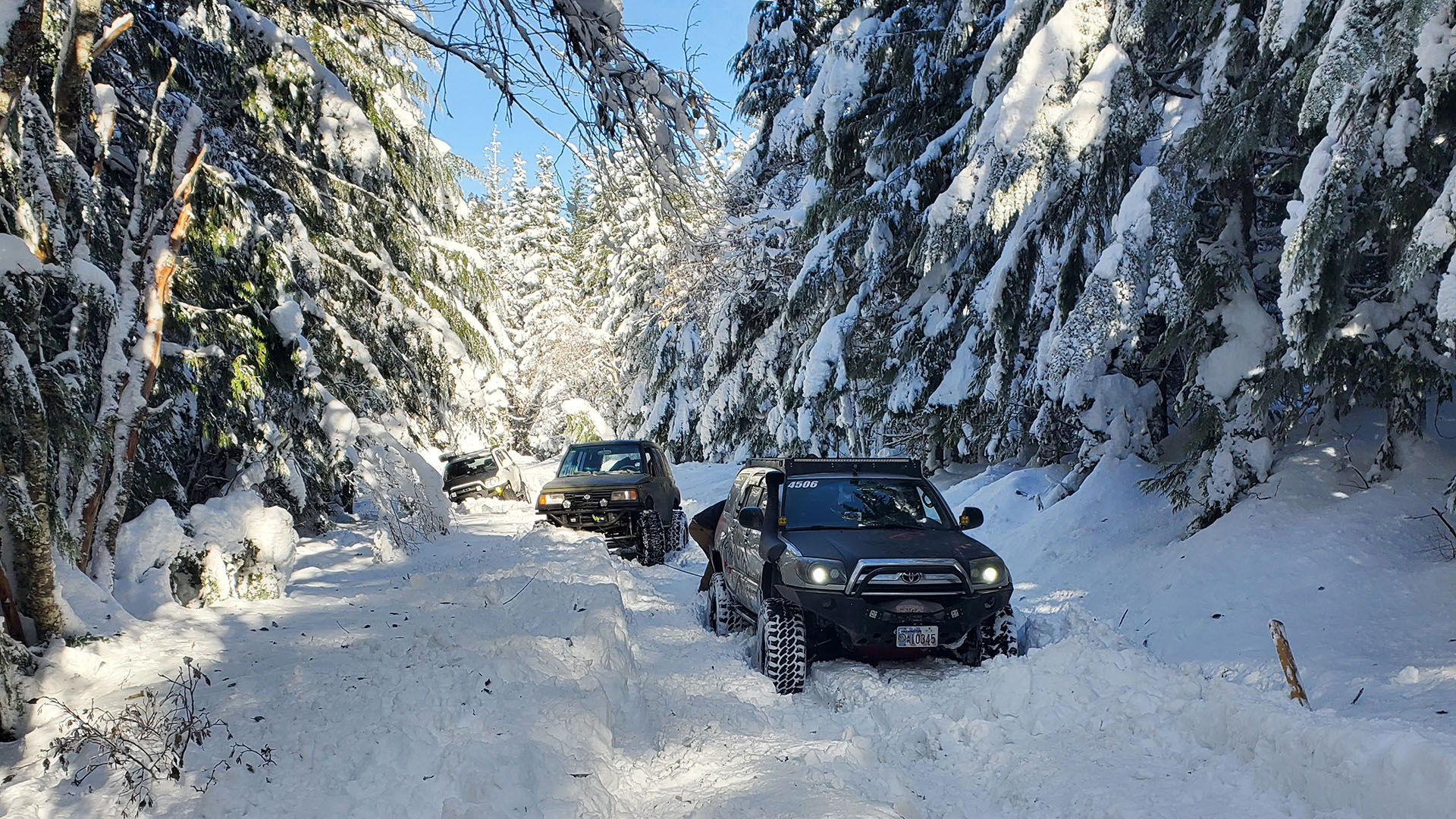 We got a request for help from Mt. Hood. December 15th, at 9:41 PM (PST). Adam McLaughlin reported to be stuck while going thru NF-1828 near Lolo Pass Rd.

We contacted him back right away and confirmed his contact information and location. We also confirmed the roads were still opened in this area.

The request read: “2004 ram 1500 4×4 with limited slip, leveling kit, studs, 4 chains. Nothing damaged. Got high centered in the snow about a 1/4 mile in on road 1828 from Lolo pass rd. Got off the road about 6″ and it sunk. We need somebody with a winch. We got a ride home but would love some help getting it out either Friday or this weekend. 18 isn’t bad but 1828 is pretty awful, I probably should have walked it a bit first. I didn’t take any pictures, just picture or a truck high centered in the snow on the road. That should pretty much do it. / I’m not with the vehicle“

We planned to activate the ticket the following morning, since Adam left the vehicle and was back home.

The same night we received the request, we also received 2 more requests at midnight that were related. Two other trucks, Tacomas, were stuck in the snow right where the first vehicle was stuck. We spoke with both of them and they agree to spend the night and to try coordinate the recovery with the other vehicle the following morning.

The following morning. we got Thomas Meier and Phil Gragg, taking care of the recovery and meeting early in the morning.

Here are the notes from Thomas: “I met up with Phil and his friend Marshall at 9:30 at intersection of lolo pass rd and muddy creek.
We proceeded to the location of the Dodge. On our way in we came to a stuck FJ cruiser that Phil pulled out fairly easily with a kinetic strap.  Not too much later both Marshall and Phil went off opposite sides of the road and got stuck in deep powder. I winched Phil out and proceeded to the Dodge.
Both Phil and myself daisy chained our vehicles together with winches and Phil winched the Dodge. We rigged a snatch block to a tree to assist in scooting back end over. I brought Maxx Traxx which became invaluable throughout the day and were used and multiple recoveries. While Phil continued to recover the Dodge I went back and winched Marshall back on to the road.
We were able to get Dodge back to a point where I could go around and recover the two stuck 4 runner while Phil got the Dodge back to the main road. The recoveries on the 4 runners went smoothly with minimal shoveling and mostly a couple of easy winch outs.
On our way out we encountered a dozen vehicle traffic Jam with a stuck Duramax in the front. I was able to go around the vehicles wheeling through the ditch to the front of the line and pulling the Dodge out using the kinetic strap. We encountered a couple other easy recoveries on the way out and finally left the lolo pass gravel lot at the base of the road at 7:30 pm.
I’ll send the vids I have I think Phil has more “