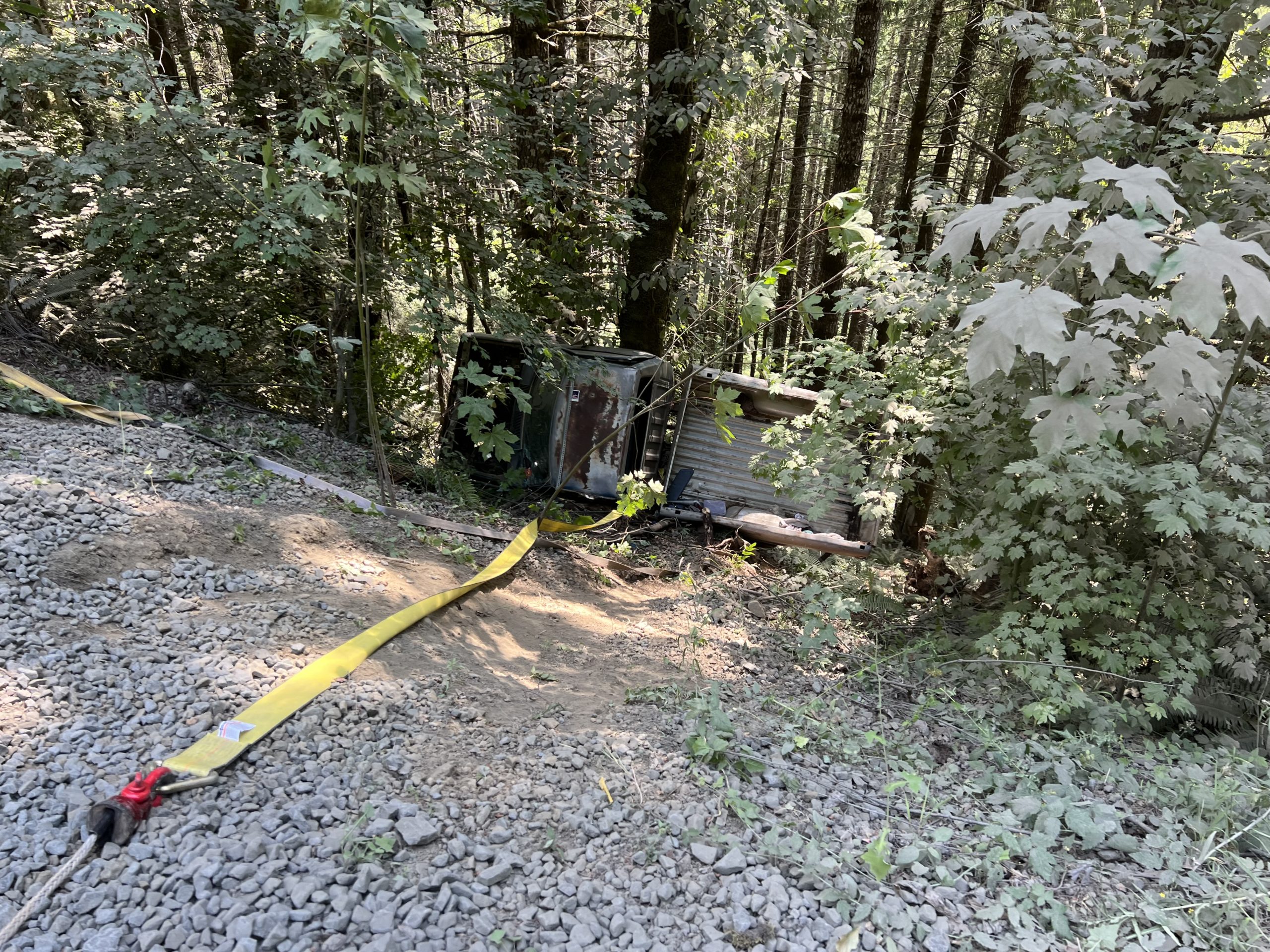 August 16th, at 2:32 PM (PST), we received a request for a recovery of a vehicle that was involved in an accident half a mile from the entrance of Browns Camp OHV in Oregon.

The ticket submitted by Aaron Ryan read: “On Saturday night near Browns Camp, an unfriendly shoved my vehicle off the cliff of University Falls Rd, causing my truck to roll over once, traveling 15 feet before lying on its side against a tree. The gravel road it went off was 1/2 mile from the highway towards Browns Camp. So far, recovery attempts with a big block Bronco and a diesel dually have been unsuccessful. The frame and cab are wrecked. / I’m not with the vehicle”

The first day we submitted this recovery to our volunteers we had just one volunteer engaged but then leave. This recovery was pretty complicated and needed big rigs and experience to be handled. We decided to go with two jeeps the following day. We met with Ryan at 2:00 pm, and followed him to the intersection of the road where the vehicle was.

After taking a good look, we decided to try anchor one of the jeeps to a tree from the back and use our 12k winch to pull the vehicle that was stuck 15 feet below against a tree. We secured the straps and added an extra line to a tree with another strap just in case anything could snapped from our initial setup.

We started pulling the vehicle up just a few feet, but the vehicle instead or rolling was coming up sideways. At the time we stopped when personnel from the Oregon Department of Forestry approached to help us. They offered to bring a 30 ton vehicle they had near by and we immediately switched the connection from our Jeep to this vehicle. What would have taken us probably one hour, took them 5 minutes. They truly saved the day, and we are extremely thankful for their help! Special thanks to Michael Morton and the rest of the crew. You guys saved the day!.

Once they pull up the vehicle, they dragged to a nearby safe area, and from there we used both jeeps, I was on my 4 door, and Myrian was on her 2 door, to pull it to the center of the street, where a large group of passerby offered to help rolled the truck back on its wheels. From there we pulled the truck backwards with Aaron on the wheel all the way to the entrance of Browns Camp where he was going to have a friend bring a flatbed later that same day.

This recovery was done, with the amazing help of the Oregon Department of Forestry, thank you guys! Aaron was very happy to get the vehicle out, he had tried for several days to get it out without any luck.