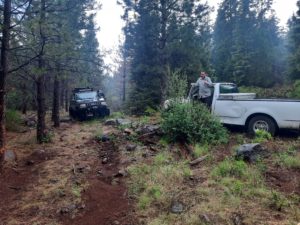 Thursday at 1:54 pm, we received a call on our emergency line from Nate Tate, who got stuck in his truck of Highway 66 near Klamath County outside of Lincoln, Oregon. He left the vehicle after getting high centered. He submitted the ticket using our web app and that helped accelerate the process.

I confirmed the details with Nate and submitted the ticket to our volunteers, inviting also folks from not just Klamath County, but also Lake and Jackson County.

A few minutes later Kanan Best reached out to the requester and marked himself as standing by. He was about 2 hours away. By 2:49 pm, Marc Estep announced he was also available and near by.

By 5:15 he was in route, and 5:57 pm, he closed the ticket after what he described as an easy pull. It keeps always amazing me, how well our system of volunteers work and organize these recoveries time after time.