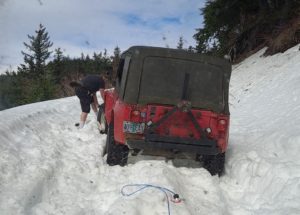 In one day, last Thursday, we got three recoveries submitted within hours of each other.

The first one was submitted by Taylor, who was driving near Browns Camp the day before when he got stuck and was taken back home by family members. He submitted the ticket the next day, and we organize a recovery in the morning.

The one jumping on this one was Reco, who, by 10:30 am, contacted Taylor and coordinated the place to meet. He also invited other members from the lobby. By 2:50 pm, he finished the recovery. Within minutes we organized the first request we received, another from Vincent, who got stuck in his truck near Sandy. We quickly assigned another group of volunteers based on their location and tried not to hit the first contacted volunteers with a second consecutive request.

The second request was a Tacoma TRD stuck on NF-3626 road in deep snow (up to axles). The truck was pointed downhill, on an off-camber angle leaning toward the driver’s side. They’ve pulled the vehicle approx 20 yards from where it initially got stuck. But they were still about 10 yards from getting onto the road. The road was snow-covered. For this second recovery, we had Kevin Moore, one of our Super Volunteers, driving from Salem, meeting with Tyson Carpenter. By 2:00 pm, they completed the rescue without any significant incident.

Kevin took the time to share a brief story about this and some pictures:
Vince and Zack went up there to enjoy the day shooting and tried turning around and didn’t make it. Vince’s wife seen the article in the paper and looked us up, and that’s how they got in contact with us. Another very happy person and I just asked him to spread the word.

Kevin said, “I used the winch, then he fell into my hole, and I pulled him out. Once he was on the road, he did fine, don’t think even a kinetic rope would have got him out the first time.”

The vehicle was a 2017 Tacoma TRD with a rear locker still didn’t give him any chance.

The third one was from Washington. A couple of guys stuck in the snow on W-1400 road, north of Beacon Rock State Park. For this one, we had around 26 volunteers invited, but one jumped to it right away, Bram, Harper.

We received this recovery request at around 1:30 pm. By 3:00 pm, Bram was already en route. Later on, Reco also marked himself as available in case Bram needed help. Bram tried to help but ran into some rugged terrain, luckily two other guys with bigger rigs showed up to help. By 7:40 pm, they were all out and safe.

Quite a busy day that allowed us to test our lobby platform with multiple tickets running simultaneously. All worked perfectly and had no glitches with our new dual server recently added. We had a total of around 120 volunteers invited, and around 70 logged and watching or participating on the lobby without any delays. Another great step forward in our journey! Thanks to everybody who participated and specially to all those volunteers who work so hard making somebody else’s day better.

Reminder: If your want to help our group, please consider becoming a patron! www.patreon.com/offroadportal A few bucks a month makes a huge difference and help us cover the cost to keep our free services going! Thanks!