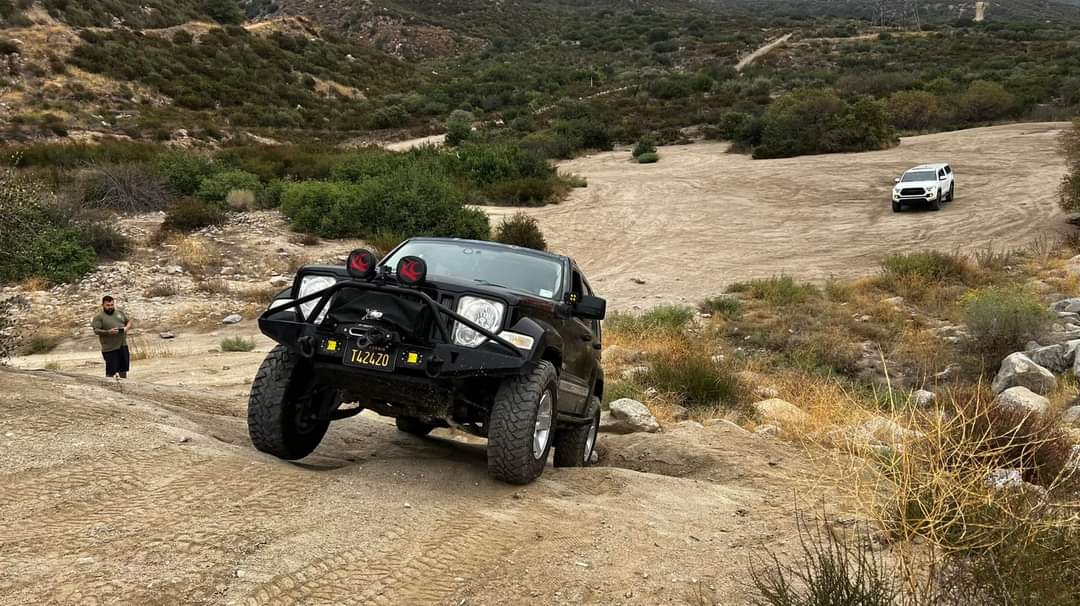 Sunday November 20th at 3:40 AM (PST) we received a request from California, one mile north of the Beek’s Place. Andy Gallegos was driving his Toyota 2WD, exploring some trails and he went too far and deep into a steep trail, from which he couldn’t turn around.

His ticket had this description:“I am very very stuck in a deep spot where my 2wd 4Runner cannot get out due to having an open diff. I started at the maple springs entrance to Santiago’s peak. I went up to where the mountain splits to two sides and I went left. I reached the antennas then went down a different trail that was blocked off but had a opening to the side. I then followed that path till it led me to another trail that was open and went far down towards corona. It was super steep and it was a horrible mistake I thought my 4Runner could handle it. The trail I was last on became pure bushes and plants and I was scared I’d get stuck trying to go back up the steep hills and it became worse and worse and when I finally turned around I kept getting stuck on everything. I called the sheriffs department and they basically told me they can’t do anything about it and that id have to call again in the morning. Someone please help im 19 and it’s just my friend and I and we didn’t know what we were getting ourselves into. We’re terrified and don’t have anything to eat and we are currently spending the night here at God knows where. I’m in a black 3rd Gen 4Runner and it’s basically impossible for this thing to drive up or down. Someone please help us! I apologize for not including pictures but maybe if someone can get I to contact with OC Sheriff they can assist. They spotted us with the chopper but soon left as it was deemed not safe. I hope this works I have no other ideas left. / I’m with the vehicle“.

Once we verified the location and contact information, I started looking for volunteers, I submitted the ticket around 4:00 AM, but since it was way too early in the morning, I couldn’t find any local help. I also shared the request with California 4×4 Rescue and also another great facebook group SoCal Off-road Recovery SOS Free. From this second group we found a lot of volunteers willing to help.

We waited until 7:00 AM to reach out to Andy again who spent the night in the vehicle waiting for help. So far nobody had contacted him from our volunteers. At 7:30 AM he was airlifted and he told us he would like to come back later to figure out how to get the vehicle out.

The first volunteer to offer help was Erick Irocio. He contacted Andy at 9:20 AM and coordinated to meet at the place in 2 hours. By 11:00 AM Erick informed on our lobby that he was at the location waiting for Andy. At 1:16 PM, we received this note from Erik: “Erick, Irocio / 01:16 PM / We got stuck a really nasty steep canyon, don’t want to risk my self and the owner. Will need someone to assist from the other end. Please assist going from end at Mapple spring trail off Santiago canyon, lake forrest.“

At around 3:10 PM, Aric Defusco contacted Andy to help as well, and finally by 4:14 PM, we learned Jonathan Hartzell was taking over the recovery.

Jonathan sent us these notes and photos: “I joined the recovery around 3pm with my Jeep Liberty. Andy and his 2wd 4Runner were just south of the 91 freeway. The day before he went out solo with a friend riding along with him and got in a little over his head. They came up from the Maple Springs entrance to the south and explored all the way north almost back to the 91, but found a dead end and couldn’t climb the hill they had come down to get there.

They called the Sheriff and got airlifted out early this morning 11/20 around 3am, but the vehicle still needed to be recovered today. Andy’s friend brought his ZJ Grand Cherokee out to try to recover him, but the route up from the 91 had a few steep rutted hills that his friend was afraid to attempt in the ZJ without a locker.

I joined the recovery around 3pm with my Jeep Liberty. I was originally planning to wait at the entrance near the 91 for another member, Aric Defusco, but I ended up deciding to set off before Aric arrived because the sun was going down and Andy’s directions were all landmark based, so I figured they would get a lot harder to follow in the dark. Aric had trouble following the directions when he got there, but I think his power wagon would have been difficult to turn around on the narrow trail anyway.

Once I got to Andy I decided to winch him up the first hill, because it was a narrow trail and I didn’t want to back down the hill to him. After that he was able to get most of the way back down on his own, but I anchored him to my front bumper for some of the steeper descents as he didn’t trust his bald tires to hold him.

The only photo I have is from Andy because I’m terrible about remembering to take photos and video on recoveries when I’m solo. The second photo isn’t from the recovery, but that’s the rig I used.

After it was all over I advised Andy to always bring a friend when he goes wheeling so that they always have a way out if someone breaks down or gets stuck.“

This was a pretty cool recovery, a lot of people involved and helping, we truly appreciate the effort each of the volunteers put into this. Erik, Aric and Jonathan who who Andy out! You guys are awesome.